Once a month, I go to private boardroom meeting with a small group of other tech founders.

It takes place in a small, nondescript conference room at a swanky hotel.  The details of who’s there and what we talk about is completely confidential.

A couple of the guys are “household names” in the tech space – and their companies (or portfolios thereof) are worth 8 and 9 figures, respectively.

There’s nearly a 100% likelihood that you’ve used one of their sites or software products in the past.

The others are similarly ultra-accomplished. Everyone’s business is doing mid 7 figures in AR at a minimum.

And then there’s me.

While I wouldn’t call my own story unimpressive… let’s just say that while I love going each month, I usually have a “micro-bout” of depression for a few days afterward each time.

Because I feel so under-accomplished by contrast. And because I am, without question, the dumbest person in the room.

So while they’re agonizing over which multi-million dollar private equity offer they should accept, or whining about feeling unmotivated because their lives are so perfect…

…I’m sitting there secretly worried about how the fuck to make payroll next month for my little team of 4, without pilfering my other investments.

(And what marketing gymnastics will be required to pull that off.)

But then a few days will pass, my ego will start recovering – and I’ll just keep plodding along.

Invariably, I’ll also end up talking to people  “lower on the totem pole” from a business perspective – where I’m no longer the dumbest person in the room. And whose biggest challenge is something I could solve in 5 minutes.

This is because “success” as a metric is usually something we measure using a very recent lookback window.

And we also compare this metric directly against our peers. So if your peers are more accomplished – you’ll feel less accomplished. And vice versa.

Now of course, an objective observer would say this is all just psychological bullshit, mixed with vanity / insecurity / whatever else. And they’re not wrong. But it’s also unfair to dismiss this internal struggle as trivial, because it’s a huge part of the mental game.

And the mental game matters – because it impacts what you do (or don’t do).

So with that in mind, here are 3 simple “re-calibrations” that I’ve found really helpful for conquering my inner demons and still accomplishing shit, in spite of being an idiot:

As entrepreneurs, we’re usually our own harshest critics.

And the measuring sticks we tend to use have a way of totally discounting what we’ve actually accomplished in our journey. Particularly if you’re just looking at the last few months, or even the last year.

For example, if you’re in the early stages of a new project, or if you’re trying to revive an old one – the recent “results curve” of your own story might look something like this: 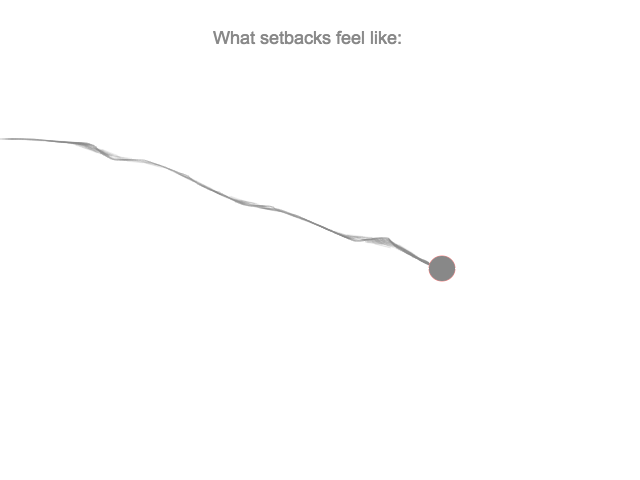 Now, let’s wind back the clock a bit, and adjust the lookback window from months to years… 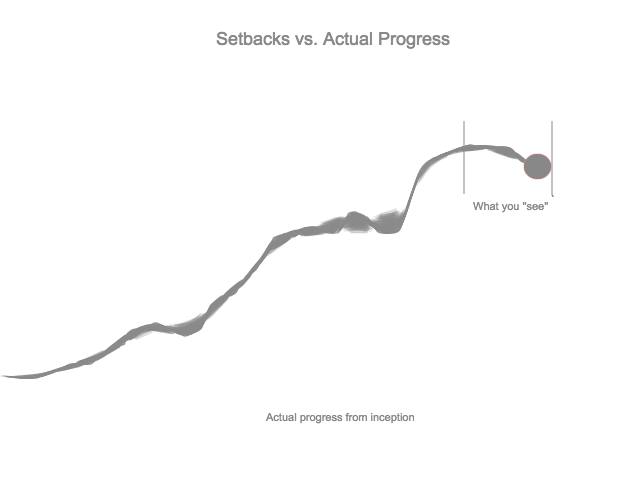 That chart can represent basically any metric you want. Most people will use revenues.

That doesn’t usually tell the full story though. As a fun exercise, try and use “capability” as a metric, if you can.

What are your current capabilities as a marketer, entrepreneur or whatever your expertise is – and how do they compare to a year ago? 5 years ago? From when you first started?

In particular, think about the things you now intrinsically understand (from experience), that you were clueless about beforehand. Now, try accurately and plot out your “capability progress”.

It’s usually going to be a steady incline, up and to the right.

Most of us are a lot further ahead, and more capable, than we realize.

Strategy #2: Realize That Your Heroes are Former Clueless Idiots

Cliches about picturing people in underwear aside – it’s very important to realize that the actual plotline of how your role models “made it” in your industry was NOT some amazing “master plan” that only they could’ve executed.

Many of my friends are wildly successful founders of tech co’s, rockstar digital marketers, angel investors, and otherwise legends in their own right.

Without exception, all of them basically stumbled across something that worked – after trying a bunch of random shit that didn’t.

And even with my own story, my own successes have always taken one of the following story arcs:

The most important takeaway though, is that the inflection point – the catalyst that provides enough sales momentum to start building on – is almost always random and startling.

And that only happens from making stuff, and telling people about it. That’s it.

Strategy #3: Convert Each Week Into a “Bank Statement”

Lastly, sometimes a great way to accurately assess your current results is to objectively record your current actions.

Again, as entrepreneurs – a lot of our workload can be mental or strategic. It can take time to evaluate opportunities / challenges before deciding on a course of action.

But if you were to take the last week (or month), and convert it into an “activity feed” that only recorded things you actually did at an implementation level, then it might literally look like this:

Even though that week might’ve been batshit crazy busy, dealing with employee drama, bookkeeping, sitting in coffee shops planning what to do next, researching new product ideas – or whatever it might be – the fact is, when you honestly assess your own “activity feed”… sometimes it becomes obvious why, despite the actual hours we’re putting in, nothing seems to be moving the needle.

Now, the solution here isn’t to feel bad and try to “work harder”.

Instead, the solution is to re-configure your existing processes so that your existing efforts are making an impact on your “activity feed”. This means adjusting your to-do list, your employees todo lists, and your overall processes.

There is a big difference between just doing stuff, vs doing stuff that matters.

And as long as your compass is pointed in a direction you want to go, sometimes all it takes to arrive at your destination is making sure your activity feed has some forward motion on it, every day.

Anyway – these 3 “resets” have been pretty helpful for me over the years.

Hopefully they’re helpful tools on your journey, too.

P.S. How about you? Do you have a strategy like this for tackling the “mental game”, and paddling ahead regardless?

If you post it below, I’ll send you positive vibes – absolutely free 🙂